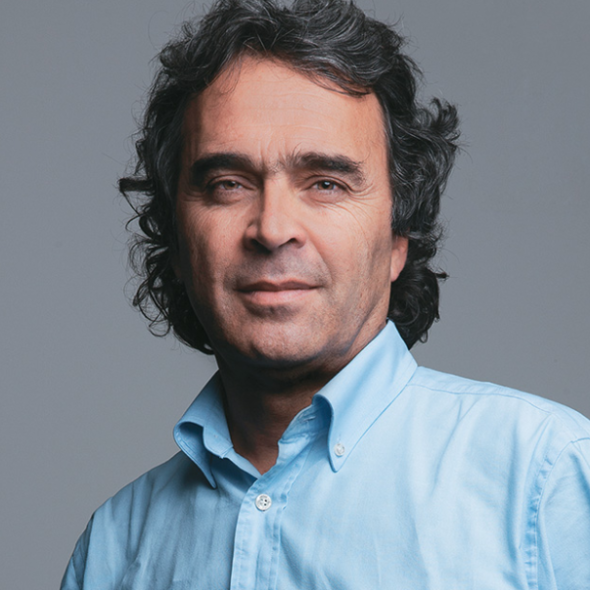 Sergio Fajardo Valderrama is a mathematician from Los Andes University, a Doctor of Mathematics at the University of Wisconsin-Madison in the United States, and Doctor Honoris Causa at the Menéndez Pelayo International University, Spain (2009) and the National University at Córdoba, Argentina (2015).

In 2010, as part of the “Green Wave,” Fajardo was a vice presidential candidate of Antanas Mockus and two years later was elected to the Government of Antioquia.

As Governor, Fajardo advanced a development plan under the slogan “Antioquia, the most educated” that focused on seeking to generate opportunities for people and regions, promote reconciliation and a culture of legality.

Fajardo claims that he aims to “promote positive integration of the country into the international system, through a transparent, proactive agenda, with coherent and consistent positions on issues such as environmental protection, biodiversity as a strategic resource and discussion on the future of the war on drugs. We commit ourselves to respecting diplomatic careers and to guaranteeing the suitability of the diplomatic staff as a whole.

Foreign policy will be based on the defense of the sovereignty of nations, respect for the self-determination of peoples without jeopardizing democratic norms, maintaining the historical vocation of Colombia to maintain harmonious relations with the countries of the world.

We will carry out a serious defense of our sovereignty in the various litigations facing our country, based on a frank and transparent dialogue with public opinion and with the commitment to respect international law. We will support the activities of international bodies in the defense and promotion of human rights in the continent, working towards the peaceful and concerted settlement of disputes that have prevailed in the Latin American region.”