Fabricio Alvarado Muñoz was born in 1974 in Costa Rica. He is a Christian singer and TV anchor who studied journalism at university; he currently serves as Deputy for San José province in the Legislative Assembly. He represents the National Restoration Party.

The recent ruling by the Inter-American Court of Human Rights that Costa Rica should grant same-sex couples inheritance and adoption rights has come to play a central role in Alvarado Muñoz’ presidential campaign. The decision has caused controversy in Costa Rica, a majority Roman Catholic nation with a growing evangelical population: Alvarado Muñoz has called the ruling a “violation of sovereignty”, a position which appears to have won him support amongst social conservatives.

On the topic of international relations, the manifesto of Alvarado Muñoz states, “For Costa Rica, a country without an army, our diplomatic policy represents a key link in the country’s human development: it is our principal point of contact with the international system. It must be managed in such a way as to promote the main values of Costa Rican society: peace, solidarity, human rights, democracy, and protection of the environment. Moreover, our diplomacy constitutes the executive arm of our international cooperation efforts … it defines our immigration politics, respecting human rights, with a perspective of justice, equity and order. It requires a solid migration policy that protects the rights of the immigrant population but also guarantees public order and the sustainability of Costa Rica’s social security system.

“In the age of globalization, the need for a country to be fully integrated in the global economy, to seek both efficiency and excellence without jeopardizing social solidarity, is the hallmark of an effective foreign trade policy.

“All our negotiations and discussions on free trade agreements have been inspired by this fundamental premise. For National Restoration, the need to improve strategic coordination of both arms of our foreign policy – commercial and diplomatic – will be our major goal in government.

“We will conduct a thorough international review of our appointed officials, as well as the procedures and mechanisms governing their appointment, leading to the administrative and legal reforms that are necessary in order to achieve a truly professional and coherent overseas political presence.

“We will move away from an approach that emphasizes formal diplomatic practice to one that is rooted in measurable and measured goals and concrete outcomes that create tangible benefits for the country. Membership of our Foreign Service should not be treated as a reward, comprised of foreign travel and entertainment.”

The manifesto also states an intention to pay more attention to diplomacy conducted with the private sector, as distinct from international organisations and foreign powers; this new emphasis will be supported by inceased coordination between the diplomatic service and national trade promotion bodies. Research and development conducted by Costa Rican universities would also inform the work of the diplomatic service and trade bodies, in order to refine the strategic goals of the country’s foreign policy.

Alvarado Muñoz proposes a migration amnesty of one year to allow for the deportation of all non-nationals refusing legalization, in order to encourage the legalization of “those who demonstrate stability and rootedness, and to halt the massive entry of illegal immigrants that is causing the collapse of our social security system: health, welfare, housing and education. We will try to bring order without violating the human rights of immigrants: in order to ensure this, the program will be coordinated with the Ombudsman’s Office.” He also promises to approve free trade agreements whose terms are “favorable and balanced for our country … the interests of Costa Rica’s farmers, businessmen and industrialists will be protected during the discussion, analysis and negotiation of commercial trade deals.” 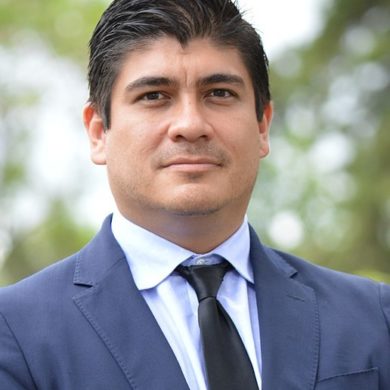