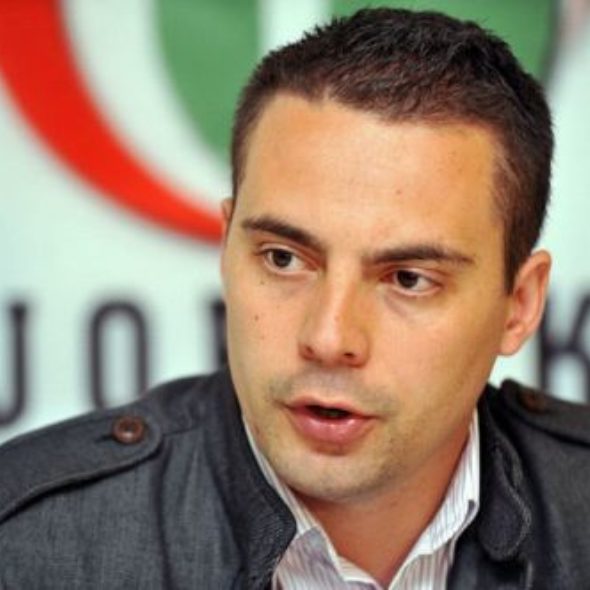 Gábor Vona is a historian and teacher. He was the founder in 2003 of Jobbik (Better Right), a right-wing nationalist party, and has acted as its leader since 2006. In 2007 he also founded the neo-fascist paramilitary Hungarian Guard which was outlawed in 2009. He is Jobbik’s candidate for Prime Minister.

In 2014, Vona held a rally in London’s Hyde Park after British anti-fascist demonstrators had prevented his supporters from accessing the original location of the rally.

In March 2014 it was announced that Vona would be declared “persona non grata” in Romania due to the rising activity of “Hungarian extremist groups.”

In a 2013 interview on the Voice of Russia radio station, Vona stated that “Israel must be forced to recognize the independent Palestinian state and to suspend its colonization plans with regard to Hungary.” In the same year, Vona stated in another interview that “Hungary was not admitted to the EU so it could develop, but it was colonized so that they could exploit its cheap labour and take away its markets. Western companies and banks are now trying to sustain their own systems through profit pumped from the East, from us. And this is only the economic part. The [European] Union has not brought good things in an intellectual and spiritual sense either. Following the devaluation of communism, we are now living through the devaluation of capitalism. Personally, I uphold traditional thinking, that is, I believe that Europe must rediscover its own roots and must settle its relations with other traditional cultures, which by now exist only in the East.”

In 2017 Vona announced that his party would shift to a more centrist position. Two years earlier he had stated at the Jobbik party conference that "...those who desire Nazi romanticism, those who desire pogroms, are knocking on the wrong door: they have no place in Jobbik."

The foreign policy proposals of his party’s electoral programme are based on protecting the rights of Hungarians, both citizens and ethnic minority groups, in neighbouring countries. They have vowed to fight for the collective, political, territorial and cultural rights of Hungarians in the territories that Hungary lost after the First World War. Jobbik also urges a stronger relationship between Slovakia, Poland, the Czech Republic and Hungary, the so called “Visegrad 4”, to secure a stronger position for the group within the EU. They consider the USA as a strong ally which could help Hungary achieve its international ambitions. They consider that maintaining good relations with the Russian Federation will have a positive effect on Hungarian economy.

Vona’s party also aims to build a strategic relationship with China and South-East Asia and assume the role of a bridge between Europe and the Far East. Speaking in 2010, Vona stated that “the next century will be Asia’s century. And Hungary, the country that recognizes this (…) will become the heart of Europe.”

The party is also in favour of a unified wages policy within the EU.