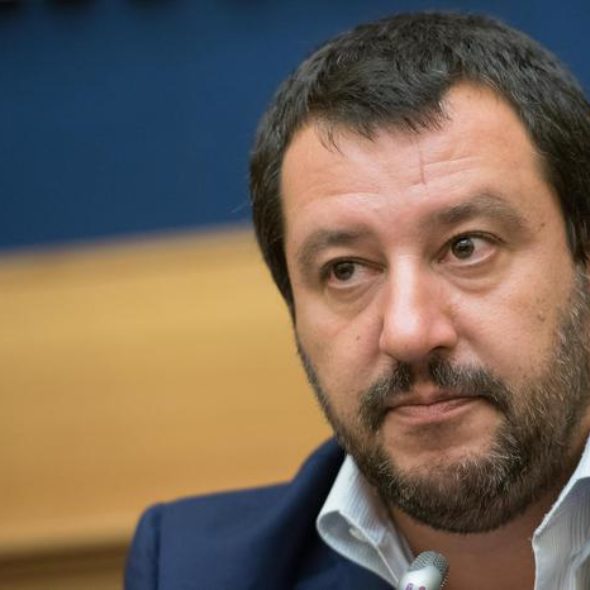 Matteo Salvini was born in Milan in 1973. He studied Historical Science at the University of Milan but did not graduate. His political career started in the youth faction of the Lega del Nord (Northern League), a far-right nativist party whose original mission was to split the more prosperous North of Italy from what it considered to be the economic and social burden of the country’s Southern half.

More recently, perhaps in an attempt to avoid alienating half of the electorate, the party has dropped the second part of its name and become simply “The League”. It now directs its invective against the centre-left government, the European Union, Islam, the single European currency (which Salvini has described as a ‘crime against humanity’) and illegal migrants (the party has pledged mass migrant deportations).

In a 2016 interview with the Washington Post, Salvini described his “personal joy” at the election of Donald Trump as U.S. president, commenting: “Good relations with Russia are great news. Putting a stop to the [Transatlantic Trade and Investment Partnership] is great news. Defending American industry against the invasion of Chinese products. Renegotiating the role of NATO. And a similar approach on the issue of immigration. This is all great news.”

Notwithstanding his frequent outbursts against outsiders, Salvini is cautious in his formal statements to distinguish between legal and illegal migration: “In Italy there are 5 million legal migrants. They’re integrated, and they’re welcome. The problem of the Muslim presence is increasingly worrying. There are more and more clashes, more and more demands. And I doubt the compatibility of Italian law with Muslim law, because it’s not just a religion but a law. And problems can be seen in Great Britain as well as in Germany, so reassessing our coexistence is fundamental… Statistics tell us that of the 500,000 people who arrived, those who are granted political asylum are more or less 10 percent. I mean those who are fleeing from war, from Syria, Iraq, Afghanistan, parts of Nigeria. Welcoming them, in all of these cases, is our duty. For illegals, though, expulsion is needed.”

Salvini has served as MEP for North-Western Italy since 2004, and since 2015 has been allied with Marine le Pen, leader of the French National Front, and Geert Wilders, leader of the Dutch Freedom Party, as a co-founding member of the Europe of Nations and Freedom group.

The League’s Manifesto states, “We wish to remain within the European Union only on condition that all the treaties are reopened for discussion (the Schengen Treaty and Dublin Regulation). The primary national interest is to preserve national sovereignty: for this reason, the “United States of Europe” projects must not be encouraged.” On climate change, the party states that “man and environment are two sides of the same coin. Whoever fails to respect the environment fails to respect himself. Our task is to support the green economy, enabling research, innovation and the development of ecological work.”