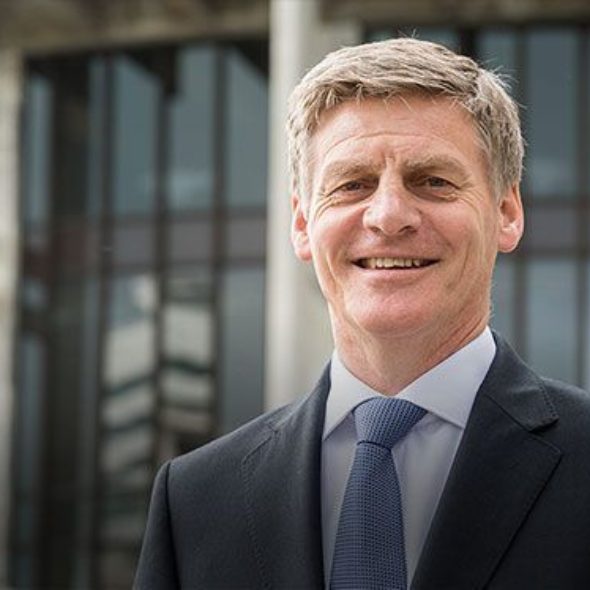 Bill English was born in 1961 in Lumsden and has been Prime Minister of New Zealand since the resignation of his predecessor, John Keys, in 2016. He has degrees in commerce from Otago University and English literature from Victoria University. He joined the National Party in 1980, and has since served as Health Minister, Finance Minister and Deputy Prime Minister.

English is regarded as socially conservative, and has stated his opposition to voluntary euthanasia, same-sex civil unions and to the liberalization of abortion law.

In his first overseas trip as Prime Minister, English travelled to Europe this year mainly to discuss trade ties, stating that “the focus of my trip will be to advance New Zealand business and trade opportunities in the regions, including starting the negotiations on an FTA with the European Union this year.”

During an official visit in the United Kingdom, English praised Prime Minister Theresa May for her “clarity and determination” concerning Brexit, also stated that “we [NZ] are ready to negotiate a high quality trade agreement with the UK when it is in the position to do so” and added that “the two nations are natural partners.” He subsequently reported that “I strongly reaffirmed New Zealand’s commitment to continue working constructively with the EU and the UK throughout this process.”

During a meeting with the Donald Tusk and Jean-Claude Juncker, English stated that “It is my expectation that we should be able to promptly conclude a trading agreement that opens up opportunities for our businesses, small and large, and underscores our shared values.”

He stated that his government wishes to continue to promote TPPA, and explained that now with the United States withdrawing, the Southeast Asian countries would be treated as priority negotiating partners.

English launched the National Party’s election campaign with a series of education policies, which include giving every primary student the chance to learn a second language. English stated that New Zealand wants its children to succeed on the world stage, and that from the bottom of the globe, they needed to be good cross-cultural communicators. “The third part of our package is a [NZ$] 160 million investment to give all primary school children the opportunity to learn a second language, if they choose, (…) Schools will choose from at least 10 priority languages, which we expect to include Mandarin, French, Spanish, Japanese and Korean, along with Te Reo and New Zealand Sign Language.”

After speaking with Donald Trump via phone in February 2017, English described him as “warm, civil and very thoughtful … a warm and friendly conversation”. In response to an unofficial invitation by Trump he commented that “I would not anticipate getting there this side of the election”. Reportedly, he also expressed his disagreement about President Trump’s travel ban, later commenting on it as “He [Trump] just noted our views. I do not think that he was surprised by people having a different view.”

More recently, when asked whether English would recommend New Zealand provide support in Iraq, Afghanistan or in any other conflict if asked to do so by President Trump, English responded, “That has been an interesting presidency that is for sure, but that is the US politics … if we get requested to participate in anything the US is doing we would consider it on its merits. We are independent, we do not do automatically what they ask … we would have a pretty tough test for any combat involvement, but we do want to play a role in the world as we do in Afghanistan at the moment. There are Kiwis everywhere and we want to be able to protect them everywhere. … I sure hope that they know what they are doing around North Korea because that is the biggest threat that we face at the moment. … I am concerned that it is escalating to a point where misjudgments could take us somewhere dangerous.”

When in May 2017 Australia announced its plans for significantly increasing student fees for New Zealanders studying in Australia, English commented that “we want a serious discussion with [the Australian government] about where they are headed with this policy” and later added “We prefer to be in a situation where we have a positive relationship with Australia … that is better than mutual ‘armed war’ to see who can treat each other’s citizens worse.”