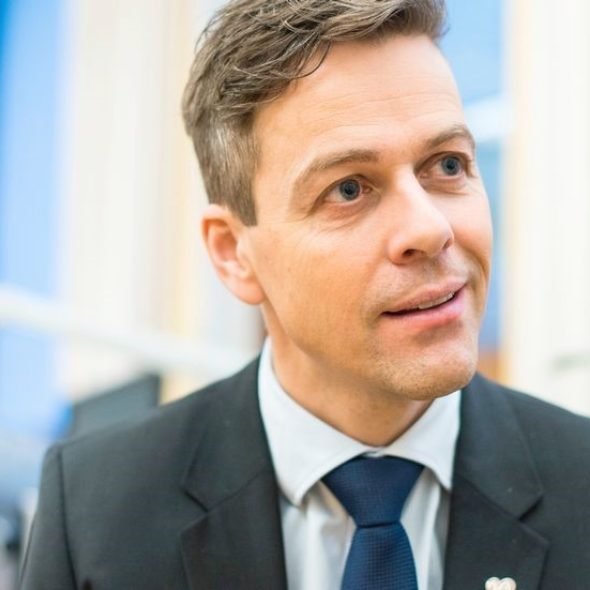 Knut Arild Hareide was born in Rubbestadneset, Norway, on November 23, 1972; he graduated in civil economics at the Norwegian School of Economics in 1997. He played an active part in the student parliament at the university, and was Leader of the Student Union of the Norwegian School of Economics and a Board Member of the national student union between 1993 and 1994.

Hareide served as a Member of the national youth board of the Christian People’s Party, and also worked as a political advisor in the Ministry of Church Affairs between 1998 and 2000. In 2001, Hareide was appointed State Secretary in the Ministry of Finance and became second Deputy Leader of the Christian Democrat Party. He was appointed Minister for the Environment in 2004.

In 2007, Hareide left politics to pursue a career at Schibsted ASA, Norway’s largest media group. However, in 2009 he won a seat in parliament and became Chair of the Standing Committee on Transport and Communications. In 2011 he was elected as Party Leader.

The Christian Democrat Party does not have a prominent international policy focus but Hareide has advocated for a ban on nuclear weapons: the Christian Democrats declare a commitment to preventing the proliferation of nuclear weapons in new countries and to achieving balanced and controlled nuclear disarmament. Trade is discussed too: since Norway is heavily dependent on trade, Hareide has argued that it is important for Norway to have a voice in international trade negotiations, claiming that agreements such as TiSA and TTIP are increasingly moving into politically sensitive areas such as a state’s ability to regulate important areas of its own society. He points to one of the challenges of TiSA, that it is not based on WTO membership, but on a smaller group of countries, arguing that the merits of trade are greatest when most countries participate, as in the WTO, and such treaties can undermine the role of the WTO and result in competing sets of rules in international trade.

Although the official position of the Christian Democrats is against Norway becoming a full EU member, Hareide is in favour of it.

Hareide regards NATO as a cornerstone of Norwegian defence politics, and has argued for reaching out to Russia.

As a Christian party, the Christian Democrats tend to emphasize their commitment to charity and compassion. Hareide has commented in a speech to Parliament: “We live in a world characterized by enormous inequality. An increasing number of people benefit from prosperity and progress, while a large minority of hundreds of millions of fellow human beings suffer from abuse, war, insecurity and poverty. This demonstrates the importance of Norwegian efforts for peace and reconciliation, binding climate action and an active development policy for poverty alleviation and international justice.”

Hareide’s party is opposed to the expansion of Norway’s oilfields, and it has made negotiations on forming or supporting a government after the election conditional on there being no assessments of or extraction from the oilfields near Lofoten, Vesterålen and Senja.