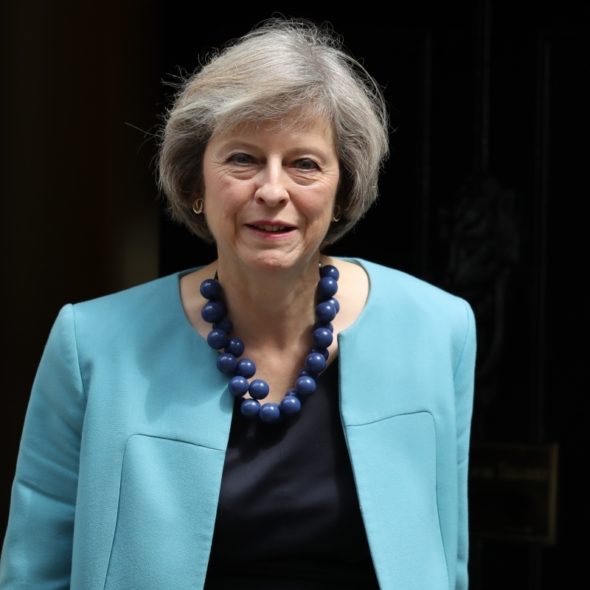 Theresa May is the current Prime Minister and leader of the Conservative Party in the United Kingdom. She is the member of Parliament for Maidenhead in the South of the country. Being neither a noted moderate nor right-wing conservative, she has been successful in uniting various factions within the party.

She is the daughter of a Church of England vicar and a practising Christian, is married to a hedge fund manager, and enjoys hiking.

Despite supporting the Remain side in the UK’s ‘Brexit’ referendum Theresa May is now in favour of leaving the EU.

Despite voting to remain in the European Union, Theresa May won the support of her party to lead the country through the Brexit process, following the resignation of the previous Prime Minister David Cameron.

She has set out her view that to leave the EU with no deal whatsoever would be preferable to a bad deal, a position commonly referred to as ‘hard Brexit’. However, she frequently speaks of Britain as an open, global nation.

She is fighting this election campaign on the promise of offering strong leadership domestically whilst dealing robustly with Brussels and the EU member states: thus, for example, her refusal to guarantee the future of EU citizens currently living in the UK.

Her ambition is to secure a post-Brexit trade deal at the same time as negotiating the terms of the UK’s departure. The EU has explicitly rejected this approach on several occasions.

Theresa May does not plan to give the British people a further referendum either on EU membership, or on the terms of the deal her government would make should she win the election.

Theresa May has consistently voted for strong enforcement of immigration rules, and a stricter asylum system.

She and her party would seek to reduce immigration. The party website states: “[We are] cracking down on abuse of the immigration system by closing bogus colleges and making it much tougher for illegal immigrants to remain in the UK by restricting access to work, housing, benefits, healthcare, bank accounts and driving licences”.

At the Conservative Party conference in 2015, May stated: “There are millions of people in poorer countries who would love to live in Britain, and there is a limit to the amount of immigration any country can and should take … When immigration is too high, when the pace of change is too fast, it’s impossible to build a cohesive society.”

She considers immigrants to be responsible for pressure on public services and for pushing down wages: “It’s difficult for schools and hospitals and core infrastructure like housing and transport to cope.” “We know that for people in low-paid jobs, wages are forced down even further while some people are forced out of work altogether.”

Theresa May is in favour of the UK’s continued membership of, and contribution to, NATO; the UK’s membership of the United Nations; and the replacement of the UK’s Trident nuclear deterrent with an upgraded weapons system - something she has insisted she is prepared to use.

After meeting with President Donald Trump Theresa May said the following about NATO: “We’re 100% behind NATO. I agreed to continue my efforts to persuade my fellow European leaders to deliver on their commitment to spend 2% of GDP on defence, so that the burden is more fairly shared.”

Theresa May is an interventionist and has almost always voted for UK military action overseas, including in Iraq, Afghanistan, and against Daesh/ISIL.

Theresa May was in David Cameron’s coalition cabinet that ratified the UN Arms Trade Treaty and committed to spending 0.7% of national income on international aid.

She has voted against measures to prevent climate change, against increased tax on automobile fuel, voted for culls of wild badgers (which are held responsible for the spread of bovine tuberculosis), and against more regulation on fracking.

In 2008 she said: “…Britain is the first country in the world to formally bind itself to cut greenhouse emissions…To stay reliant on fossil fuels would mean tying ourselves to increasingly unstable supplies which could endanger our energy security…”

One of her first acts as Prime Minister was to close the Department for Energy and Climate Change.