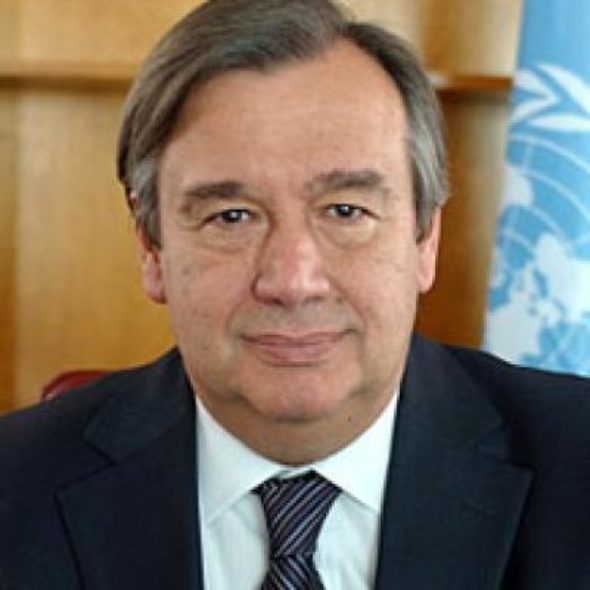 Antonio Guterres served as United Nations High Commissioner for Refugees from 2005 to 2015, heading one of the world's foremost humanitarian organizations with nearly 10,000 staff working in 125 countries. Before joining UNHCR, Guterres spent more than 20 years in government and public service. He served as prime minister of Portugal from 1995 to 2002. As president of the European Council in early 2000, he led the adoption of the "Lisbon Agenda" and co-chaired the first European Union-Africa summit. From 1981 to 1983, Guterres was a member of the Parliamentary Assembly of the Council of Europe, during which time he was also elected as chairman of the Committee on Demography, Migration and Refugees.

“It's widely recognized that there is no peace without development and no development without peace; it is also true that there is no peace and sustainable development without respect for human rights. Based on its acquis and normative framework, the UN human rights system has a key role to play in strengthening member States' capacity to comply with their human rights obligations, without discrimination. The SG should ensure the mainstreaming of human rights across the whole UN system, notably through the Human Rights Up Front initiative, preventing violations and abuses, ensuring accountability and addressing the plight of victims."

“The UN must be at the forefront of the global movement towards gender equality, an inalienable and indivisible feature of all human rights and fundamental freedoms: progressively moving from perceiving women and girls as a subject of protection to promoting their empowerment; from an isolated focus on women to gender mainstreaming.”

“The world spends much more energy and resources managing crises than preventing them. Thus the UN must uphold a strategic commitment to a "culture of prevention", pledged in 2005 but yet to materialize … we need a surge in diplomacy for peace.”

“… values are, indeed, the defining argument and the vital strength in our collective mobilization against intolerance, violent extremism and radicalization. To prevent them, we need to foster inclusion, solidarity and the cohesion of multi-ethnic, multicultural and multi- religious societies. This is also the best antidote to racism, xenophobia, islamophobia and anti-Semitism.”

“Reform [of the United Nations] is not a onetime action, it is a permanent attitude to make the UN less bureaucratic and more efficient, productive and field oriented; to simplify processes, eliminate redundant structural costs and make full use of modern technology and innovation.”