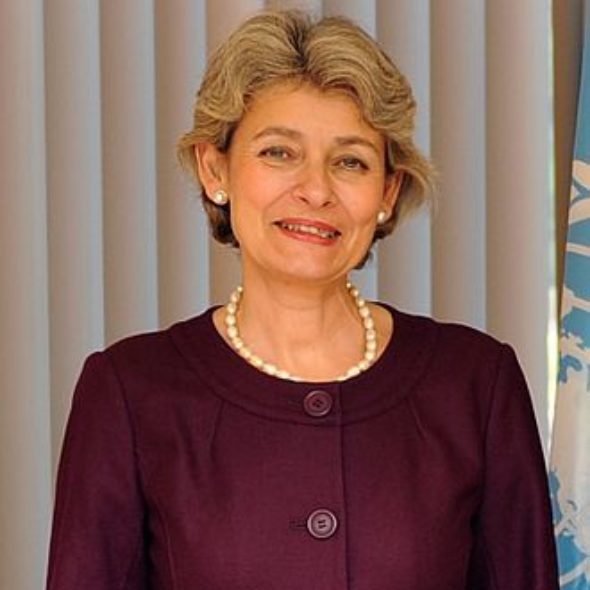 Irina Bokova, a Bulgarian national, is currently serving her second term as Director-General of UNESCO. Her academic background is in International Relations, and she has served as diplomat, parliamentarian and acting Foreign Minister of Bulgaria. At UNESCO, Bokova’s personal focus has been on gender equality, access to education, and the fight against racism. She is Executive Secretary of the Steering Committee of the UN Secretary-General's Global Education First Initiative.

“I am more convinced than ever that the world, and the United Nations at its service, need a new humanistic approach to tackle a horizon of pressing challenges and threats.”

“Now the world is calling for more united nations. Not less. It is calling for stronger leadership, more effective multilateralism, better diplomacy, deeper dialogue, and new opportunities for cooperation. Not less.”

“We need a new multilateralism for the 21st century — one that is vibrant, inclusive, effective and efficient, based on shared values and norms, leaving no effort unspent for dialogue, drawing on the strengths of governments along with the civil society, the private sector and academia, to forge new partnerships for innovative action.”

“This means investing in diplomacy, to engage early and comprehensively against the drivers of conflicts. This means also reviewing our approach to peacekeeping. This renewed approach reflecting our united efforts to protect, should encompass prevention of conflicts, mediation, rapid responses to humanitarian crises, natural disasters and heritage destruction.”

“Gender equality is a basic human right and I am convinced in its transformational force to establish more just, inclusive and sustainable societies. Women's empowerment is a breakthrough strategy for reaching the sustainable development goals. I see promoting gender equality as one of the steepest challenges of the 215t century, part and parcel of the struggle for human and civil rights across the world. This is also one of the greatest opportunities to achieve sustainable development and lasting peace.

I believe that empowering women cannot be reached without ending violence against them, including sexual violence and rape, which is a grave violation of human rights. I am determined to work with governments and the civil society to combat any kind of violence against women and girls. Violence has multiple physical, sexual and mental consequences for millions of women and girls, preventing them from participating fully in social life and equally affecting their families, communities and societies at large.”

“Millions of women and men are looking to the United Nations … to embody humanity as a single community, sharing values and aspirations, holding a history and a destiny in common.“