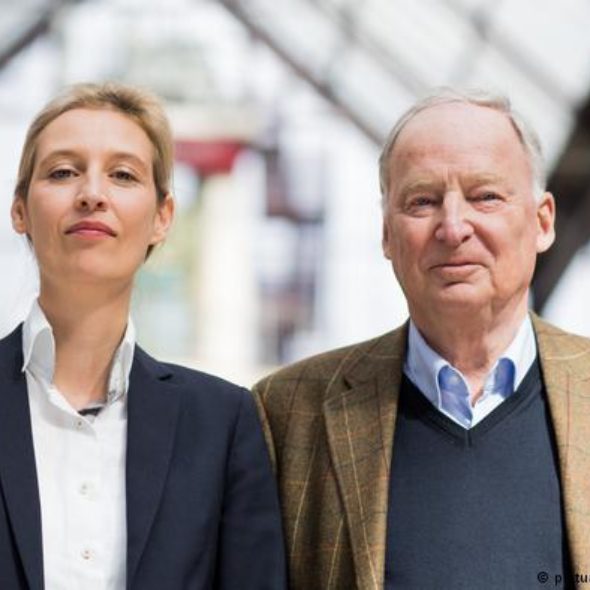 Alexander Gauland and Alice Weidel were nominated as the top candidates of the AFD (literally, Alternative for Germany) in 2017. The AFD was founded in 2013 in response to the German government’s handling of the Eurozone crisis: it is not yet represented in the German parliament.

Dr Gauland is a writer and politician. In the 1980s, he worked as a department head in the Federal Ministry for the Environment and was chief of staff for the premier of Hesse. Later, Dr Gauland worked as an author and journalist. Dr Weidel is an economist and has spent time working in asset management and as a management consultant.

Dr Gauland and Dr Weidel call for a foreign policy that promotes Germany’s national interests and uses them as the main yardstick for all government action. This approach shapes their outlook on all facets of Germany’s role in the world – international alliances, military intervention, development aid and indeed the climate. Dr Gauland has repeatedly invoked the policies of Otto von Bismarck.

On that basis, the AfD leaders support the membership in NATO but also argue for closer ties with Russia. In principle, they endorse Germany’s membership in the European Union, but they oppose both the Euro and open borders between the EU’s member countries.

A central theme of the AfD’s position is its fierce opposition to migration and Germany’s approach to the refugee crisis. Dr Weidel argues that “no important question of our time can be separated from the migration issue”.

The AfD was initially formed in response to Germany’s handling of the Eurozone crisis. To Gauland and Weidel, there were two conditions for accepting the Euro as a shared currency. First, the members’ commitment to keeping their national debt below 60% of each country’s GDP; secondly, members should not be liable for another country’s debts. These rules have been broken during the response to the Eurozone crisis and through the bailout packages for Greece in particular. Dr Gauland sees this as a violation of Germany’s sovereignty; Dr Weidel has called this the “gradual dissolution of the rule of law”.

Dr Gauland and Dr Weidel argues that the European Union’s external borders are ineffective and that, as a consequence, national borders need to be re-established. Dr Weidel has blamed recent terror attacks on Germany’s and Europe’s open borders which, according to Weidel, allow terrorists to “enter and leave without any control”.

The AFD leaders call for a greater emphasis on Germany’s security. For example, they suggested reintroducing conscription and dramatically increasing the combat-readiness of the German military (the Bundeswehr).

The AfD sees Germany on the wrong track in its climate policy. As Dr Gauland puts it: “Our supporters are sceptical of climate change – we need to stick with our old mix of energy sources”. Rather than seeing climate change as man-made, Gauland argues that the world is passing through a naturally warm period.

Gauland and Weidel advocate pulling out of the Paris Climate Accord and halting the transition towards renewable energy sources.

The AfD leaders have been the greatest critics of Germany’s handling of the refugee crisis. Dr Gauland argues that a welfare state with open borders cannot survive, and he has defended AfD members’ call for “Germany for the Germans”. To stop the flow of refugees, Gauland has called for shutting down both the Mediterranean and Balkan routes used by refugees as well as reinstating national borders. Dr Weidel believes that “only fences guarantee freedom”.

Dr Weidel accused Chancellor Merkel of turning Germany into a “criminal hotspot” through her policy of accepting refugees. Dismayed by the slow pace of deporting asylum-seekers, she has also called for the German military to take charge of deportations to Afghanistan and other countries.

Dr Gauland and Dr Weidel have opposed the German military presence in Afghanistan and other countries and advocate never again deploying German troops outside NATO territory.

Discussing Germany’s policy towards Israel in particular, Dr Gauland has termed this one of the great open questions of Germany’s foreign policy. He questioned the promise that Israel’s existence is part of Germany’s national interest and argues this could not be backed up in practice.

In the foreign policy paper he developed for the AfD, Dr Gauland highlighted the importance of bolstering Russia. He argued that “Germany and Europe have no interest in further weakening Russia” and proposed going back to Otto von Bismarck’s policy of neutrality and non-intervention towards Russia.