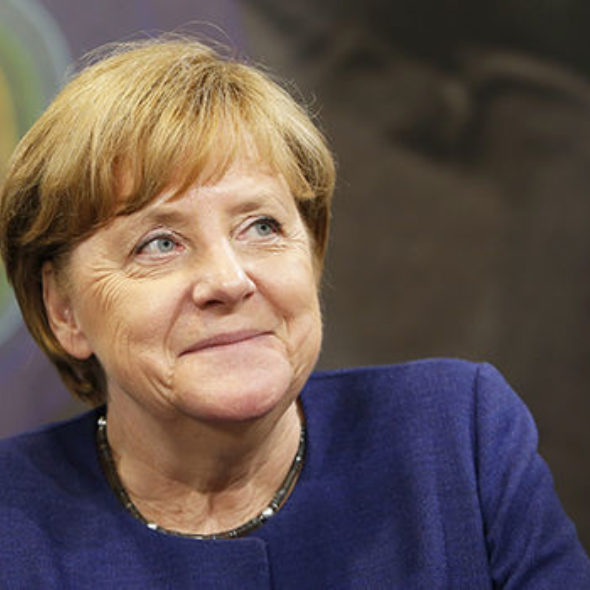 Angela Merkel has been the Chancellor of Germany since 2005. By background, she is a physicist and following Germany’s reunification, she served as Federal Minister, first for Families and later for the Environment. On 6th December 2016, she was nominated once again as the candidate of the Christian Democratic Union for the upcoming election.

Mrs Merkel is recognised as a pragmatic politician who tends to respond to problems and challenges as they emerge rather than be driven by abstract ideologies or by more than a general commitment to freedom and the post-Cold War liberal order. In her time as Germany’s Chancellor, she has had to respond to more crises than most of her predecessors: the Eurozone debt crisis, the military conflict between Russia and Ukraine, and the dramatic influx of refugees into the EU since 2015. Merkel has repeatedly been called the most powerful woman in the world.

In a time of dramatic changes, Merkel has pledged that Germany can be relied upon as an anchor of stability in the Western liberal order. The Chancellor favours stability and has once described her approach as a “policy of small steps”, making incremental adjustments to the status quo where needed.

While affirming Germany’s responsibilities in the world, Mrs Merkel has never taken an interventionist approach. Having initially supported the Iraq War in 2003, she refrained from action in Libya’s Civil War and approved only a limited engagement of German military forces in the fight against ISIS.

In recent years, the Chancellor has focused on Germany’s humanitarian responsibilities towards refugees escaping from war in the Middle East.

Mrs Merkel is a committed pro-European and has taken a leading role in steering the European Union. In this position, she has largely maintained the status quo, remaining sceptical towards more ambitious reforms to the EU’s institutions. To deal with the debt crisis in Greece and other Southern European countries, she chose a different strategy from the US stimulus packages, instead insisting on fiscal austerity and a programme of privatisation.

Following the election of US President Donald Trump, Mrs Merkel has placed an ever greater emphasis on the EU’s role. In March 2017, she went so far as to say that “we must fight for our future on our own, for our destiny as Europeans” and declared that the US could no longer be relied upon as an international partner.

In this context, Mrs Merkel has spoken out in favour of a European army. However, she has been more ambiguous about reforms in the Eurozone, such as the plans of French President Emmanuel Macron to create a Eurozone Finance Minister with a dedicated budget for investments. So far, Merkel has refused to commit to a concrete strategy for reforms before the September elections.

As Chancellor, Angela Merkel has consistently supported free trade, including the abandoned transatlantic free trade agreement (TTIP) with the US. Merkel enshrined free trade in the final declaration of the 2017 summit of the G20 and has argued for reviving the TTIP following the September election.

Since first elected in 2005, Merkel has led a number of trade delegations to China; so far, Merkel is reportedly the only leader to have attended every G20 meeting since the first one in 2008, including hosting the 2017 summit in Hamburg. Merkel is reported to have criticized the draft of the US sanctions against Russia that target EU-Russia energy projects, including the Nordstream 2 pipeline.

Mrs Merkel has sometimes been called the “climate chancellor”. When chairing the European Council in 2007, she spearheaded ambitious targets for cutting emissions by 20% by 2020. Following the nuclear meltdown at Fukushima, she acted quickly to phase out nuclear energy from Germany’s energy mix.

More recently, since ratifying the Paris Climate Accord, Mrs Merkel has hesitated to sign off on any long-term plan for delivering on Germany’s commitments towards climate protection.

In response to increasing pressure from the US, Angela Merkel has committed to achieving the NATO goal of spending 2% of Germany’s GDP on defence.

In 2015, Merkel famously announced “We can do this”, suggesting that Germany could handle the mass influx of nearly 1 million refugees, especially from Syria and Iraq. Since then, she has slowed migration flows via the Balkans through a controversial agreement with Turkey. Through this arrangement, the EU pledged financial support in return for Turkey’s guarantee to hinder refugees from moving onwards into the European Union.

While Merkel has refused to cap the number of asylum-seekers in Germany, she has supported the increasing deportation of refugees who have been denied asylum, including from countries such as Afghanistan.

Mrs Merkel has been largely restrained in responding to the increasingly authoritarian approach of Turkey’s President Erdoğan. While the Chancellor ultimatately criticised the crackdown and mass arrests following Turkey’s failed coup of 2016, she has also emphasised Germany’s close partnership with Turkey, so as to not endanger the so-called refugee deal.

Following the arrest of German citizens in Turkey in August 2017, Merkel announced that she would “rethink” her policy towards Turkey.

Angela Merkel is widely considered as leading the Western response to the crisis in Ukraine, which culminated in the Minsk Treaty of 2015. She has consistently advocated a balancing act between sanctions and dialogue with Russia’s President Putin. In this context, Merkel supported economic sanctions by the EU but criticised the expanded sanctions imposed by the US in July 2017, which also penalise European companies.