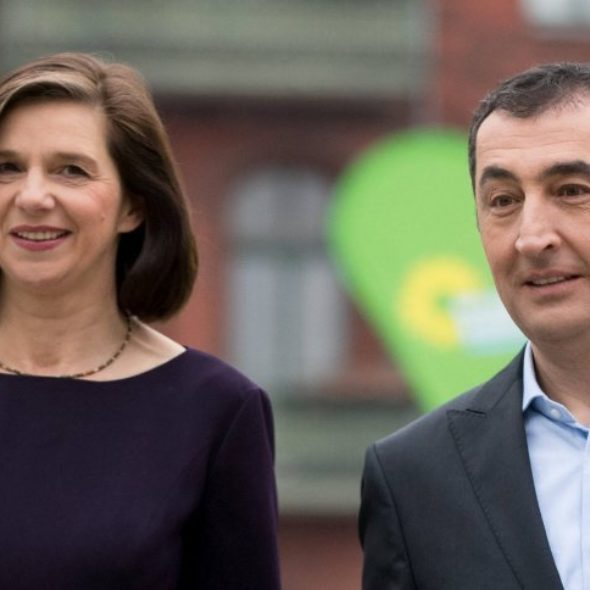 In recent years, the German Greens have always nominated a man and a woman as their top candidates (Spitzenkandidaten). One is Katrin Göring-Eckardt, a former youth activist in Communist East Germany, a leading figure in the Protestant Church and the leader of the Green faction in the German parliament. The other is Cem Özdemir, a social education worker by background and the son of Turkish immigrants. He was the first German MP with Turkish parentage and has been the leader of the Green Party since 2008.

Göring-Eckardt and Özdemir are both considered part of the “Realo” wing of the Greens with centrist positions but have pledged to “represent the Greens in all their breadth”. When her selection was announced, Mrs Göring-Eckardt promised an ecologically driven campaign for a “good climate both in nature and in society”. Mr Özdemir has named climate change, equal opportunities, the successful integration of migrants, “the fight for Europe” and an ecologically just modernisation of the economy as key priorities of his party.

Mr Özdemir in particular leads the Greens on a number of foreign policy issues, having been part of the foreign affairs committees of the German and European parliaments. He is a strong supporter of the transatlantic relationship, one of the authors of a German resolution recognising the Armenian Genocide, and has defined the Greens’ policies on China.

Both Göring-Eckardt and Özdemir have strongly endorsed Chancellor Merkel’s policy to welcome large numbers of refugees in Germany while criticising more recent approaches.

The Green Party leaders advocate for a united Europe as a long-term objective for German policy.

In particular, Mrs Göring-Eckardt has called for an “energy and climate union with ambitious targets”, which she regards as the most effective force for combatting climate change.

Mr Özdemir has criticised Chancellor Merkel’s approach to the Eurozone crisis and for imposing austerity policies on Greece and other Southern European countries. According to Özdemir this has, for the first time, pitted Germany against those supporting ever greater integration and solidarity across the European Union.

Mrs Göring-Eckardt has called for a more coherent European approach to refugees and asylum policy. She wants to rely on securing the EU’s external border rather than reinstating member countries’ internal borders. For Göring-Eckardt, greater solidarity with Italy and Greece – where the majority of refugees arrive – is vital. Countries that do not take their appropriate share of refugees should offer financial compensation instead, she argues.

Climate Change has long been the central topic of the Green party and Özdemir and Göring-Eckardt see Germany as lagging behind in protecting the climate and promoting a more ecological economy.

The Green Party leaders have been vehement critics of the current government’s response to revelations that German carmakers have systematically falsified the emission readings of diesel cars. Mr Özdemir has criticised the Government for not defining an end date for selling diesel or petrol fuelled cars and thus delaying the transition to zero-emission transport.

In 2015, to the ARD, Mrs Göring-Eckardt described the integration of refugees and other migrants as a historic opportunity even greater than German reunification.

Mrs Göring-Eckardt has echoed Chancellor Merkel’s calls for tackling the refugee crisis at its source, in the countries, joining the call for a German Marshall Plan for Africa but also highlighting the role of fairer trade regimes and more sustainable agriculture.

In an opinion piece for the Frankfurter Allgemeine Zeitung, Mr Özdemir declared that integration will only succeed if Germany’s values and the principles of its legal order are asserted forcefully in the programmes and courses offered to immigrants in Germany. As part of a “preventative strategy” against radicalisation, Özdemir has called for promoting an understanding of Islam “which is compatible with Germany’s constitution and does not leave the prerogative to interpret to fundamentalists”.

Mr Özdemir has been one of the most vocal critics of Turkish President Recep Tayyip Erdoğan and has been outspoken about human rights violations, for instance against the 2013 Gezi Park protestors and also following the attempted military coup in 2016.

In 2016, Özdemir initiated a resolution in the German parliament that formally recognised the Armenian Genocide in the Ottoman Empire. For this, he faced repeated verbal attacks from representatives of the Turkish government, including President Erdoğan.

On the other hand, Özdemir has criticised Chancellor Angela Merkel for freezing the Turkish accession talks in the European Union. In a radio interview with Deutschlandfunk in 2016, he called this step “maybe the biggest mistake made in Germany’s policy on Turkey” and argues it disrupted the “forces of reform” in Turkey.

Mr Özdemir and Mrs Göring-Eckardt have repeatedly expressed their concerns about the human rights situation in China, calling for a values-driven foreign policy towards China in a resolution passed by the Green faction in the German parliament.

Özdemir has also established a regular dialogue between the Greens and representatives of the Communist Party, especially on environmental issues, and has welcomed Chinese pilot programmes on low-carbon development as among the world’s most ambitious undertakings in this field.