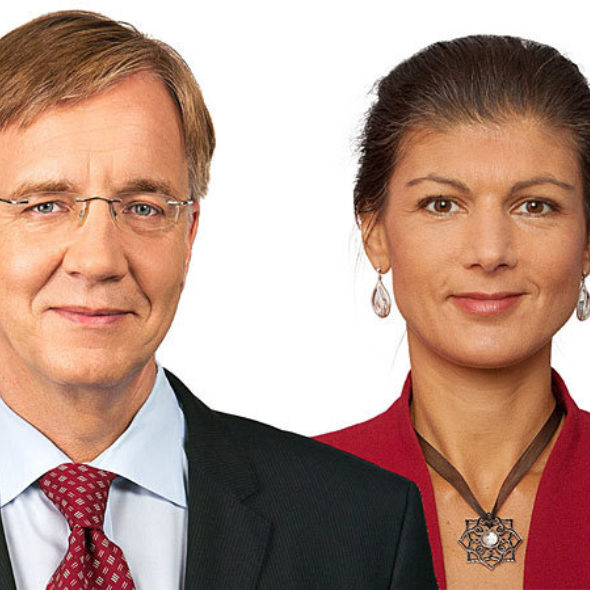 Sahra Wagenknecht and Dietmar Bartsch have been co-chairs of the parliamentary group of The Left since 2015. The Left is a party created in 2007 through a merger of the PDS (itself the successor of the East German Socialist Party) and a splinter group of the German Social Democrats.

Mrs Wagenknecht is an economist and an author of critical works on capitalism. She has been an MP since 2009 and previously sat in the European Parliament. Mr Bartsch also has a background as an economist and was the CEO of two Socialist newspapers (junge Welt and Neues Deutschland). He first joined the German parliament in 1998.

Mrs Wagenknecht and Mr Bartsch are committed pacifists and advocates of “a politics of peace”. Both have, on principle, opposed any international operations of the German military (the Bundeswehr), especially in the global war on terror. They are proponents of disarmament and non-proliferation, criticising in their party’s manifesto the “military build-up of the European Union” and pledging to ban all German exports of arms and military equipment.

Instead, they endorse a peaceful resolution of the world’s conflicts and promote international solidarity as the guiding principle for Germany’s foreign policy, with a strong focus on development aid and a reform of the global trade system.

In Europe, Mrs Wagenknecht and Mr Bartsch are prominent critics of the austerity policy of Chancellor Merkel and the European Commission. They stress that Europe’s crisis is a social one and has to be addressed through a real commitment to social justice.

The Left has been the most vocal critic of Chancellor Angela Merkel’s policies for the European Union and her response to the Eurocrisis. Mr Bartsch has accused the Chancellor of “leading the EU into the greatest crisis and to the brink of failure”, resulting in economic devastation and record-high youth unemployment in Southern Europe.

Mrs Wagenknecht has focused on the monetary policies of the European Central Bank in particular, arguing that they are not designed to support countries and their governments, but rather to bolster banks. Instead, she has called for a public investment programme to boost job creation and build infrastructure. Mrs Wagenknecht has called the Euro a mistake and blames the common currency for deepening inequality across the European Union.

Following the Brexit referendum in the UK, Mrs Wagenknecht proposed nine building blocks for “saving the European idea”. Through these measures, the EU was to offer real protection to its citizens against the socio-economic dislocation caused by globalisation. In particular, she argued for an end to loan dumping (“equal wages for equal work”), and proposed tax hikes for millionaires and billionaires in order to reduce government debt across the EU.

Mrs Wagenknecht and Mr Bartsch have rejected the EU’s recent fair trade deals and negotiations with the US, Canada and Japan. They argue that these negotiations are entirely driven by corporate agendas and fail to protect jobs threatened by globalisation.

In the context of the North Korea’s nuclear threats, Mr Bartsch has reiterated The Left’s call “to destroy the world’s nuclear arsenal – without exception”.

Bartsch and Wagenknecht have both spoken out vehemently against Germany’s exports of tanks and other military equipment to autocratic regimes such as Saudi Arabia and, increasingly, Turkey.

As part of its “politics of peace”, The Left has argued for the importance of international solidarity and addressing global inequalities. Mrs Wagenknecht and Mr Bartsch have committed to the target of spending 0.7% of Germany’s GDP on development aid. Beyond aid, they stress the need for reforming international trade and tax regimes which perpetuate exploitation and dependency. For example, they reject opening up markets in the Global South for agricultural exports from the EU which they see as damaging to local economies.

In the lively debate about refugees in Germany, Mrs Wagenknecht has been damning about what she calls the “uncontrolled opening of Germany’s borders”, even attributing the deadly terror attack on a Berlin Christmas Market in December 2016 to this policy.

Mrs Wagenknecht places the refugee crisis in the larger context of Germany’s foreign policy, arguing: “Everyone knows that we cannot solve the problem of poverty and war in this world through accepting refugees”. She highlights that the policies of The Left – a fairer trade policy and disarmament – would reduce the number of refugees in the long run. Mr Bartsch has claimed that Chancellor Merkel’s approach to combating the causes of migration cannot be effective since it does not address those structural causes of poverty and conflict.

Mrs Wagenknecht has argued that the military operations against the Islamic State group in Syria and Iraq are against international law, and has repeatedly called for pulling back German forces from the conflict.

Mr Bartsch argues against military interventions in general, frequently pointing to the case of Afghanistan where the death of 50 German soldiers and billions in costs have not brought any lasting improvements but have ended in what he considers a “disaster” – with the “Taliban about to rule the country again, just as before 2002”.

Among Germany’s political parties, The Left is traditionally the one most friendly towards Russia. Indeed, Mrs Wagenknecht has categorically rejected the joint US-EU sanctions against Russia which she regards as economically motivated and hypocritical. In Wagenknecht’s view, the US invasion of Iraq in 2003 would have given equal cause for sanctions against the US.

Mrs Wagenknecht has supported Christian Lindner’s call to accept the Russian annexation of Crimea as a “provisional arrangement” in order to re-establish a dialogue with the Russian government and achieve progress on other issues, such as the Syrian Civil War.