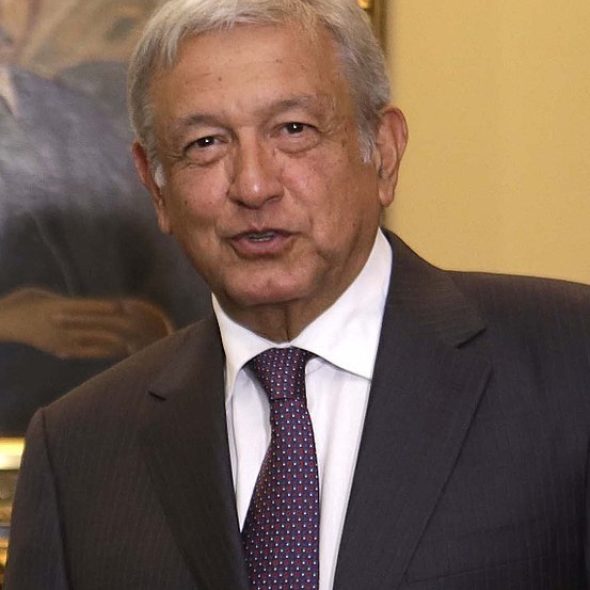 Andrés Manuel López Obrador was born in 1953 in Villa de Tepetitán, Mexico. He attended the Universidad Nacional Autónma de México where he studied Political Science and Public Administration. This is the third time that López Obrador has run for president. His first political office position was held in 1977 as director of the Instituto Indigenista de Tabasco. From 2000 – 2006, he was the Head of Government of the Federal District of Mexico City.

As regards foreign policy, López Obrador’s approach is first to focus on reform of national government in order to strengthen Mexico’s independence, freedom and sovereignty in the international community and to create greater internal stability, stating that “…the best foreign policy is domestic policy”. He has stated that corruption and a culture of impunity are an obstacle to these aims, and that the image of Mexico first needs to be restored in order to strengthen its international relations. He plans to maintain ties of friendship and cooperation with all regions and continents, with priority to Latin American and the Caribbean states for reasons of historical and cultural ties, and for solidarity. He has spoken about creating closer relations with the China, Russia, South Africa, Brazil and India, for both economic and commercial reasons.

In regard to the United States and the Trump administration, López Obrador seeks to ‘build a collaborative relationship based on respect, cooperation, peace, and tranquility for all peoples for the good of the two nations’. He aims to tackle the problem of migration from Mexico to the United States by creating more work in Mexico, as well as providing legal assistance to those who have emigrated. He is opposed to Trump’s plan of building a wall along the US-Mexico border, and has pledged to ensure that the primary function of the embassies and consulates of Mexico in the United States is to defend Mexican migrants and their human rights.

In his presidential program, López Obrador proposes increased financial aid for students and the elderly, universal access to public colleges, cancellation of the New Mexico City International Airport, reform of the PEMEX oil industry monopoly and building of more oil refineries, increasing spending on welfare, and focusing on investing in the poorest in Mexican society.

He has stated that “The government of Mexico, in matters of foreign policy, will act with moderation and respect, without assuming leading positions, without concern for appearances. Extravagance does not lead to anything good. But it must also be clear that we will defend our sovereignty and our independence with seriousness and firmness. Mexico will never be a colony or protectorate of any foreign country.”