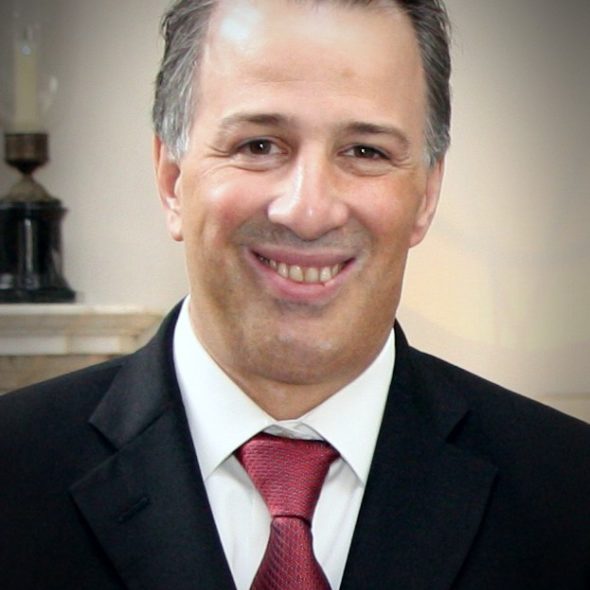 José Antonio Meade Kuribreña was born in 1969 in México City. He received a degree in Economics with honours from Instituto Tecnológico Autónomo de México, a law degree from the Law School of the Universidad Nacional Autónoma de México, and a PhD in Economics, focusing on Public Finance and International Economics, from Yale University. He previously served as Minister of Foreign Affairs of Mexico, and in other cabinet positions under the previous government. He is running for president with Institutional Revolutionary Party (PRI) and in political alliance with “Everyone for Mexico.”

Meade has stated that “Mexico's foreign policy is guided by a firm belief of the country's right to self determination." His foreign policy is based on the principle of increasing Mexico’s participation as a geopolitical, economic, and demographic force. He believes that Mexico needs to be active on a multilateral level, becoming more active and more involved in the decisions of the G20, the 2030 Sustainable Developmental Goals agenda, the Paris Agreement, and the Pacific Alliance. He aims to strengthen relations with Latin America and the Caribbean. He intends to diversify and extend strategic relations with Argentina, Chile, and Brazil, to enhance inbound tourism from Canada, and to increase trade with China, South Korea, India, and Indonesia.

Meade states that his aims include repairing and rebuilding a respectful relationship with the United States. He aims to strengthen legal protection for Mexicans and their families in the United States, and in order to address the two countries’ common interests, he plans to review Mexico’s treatment of drug trafficking, terrorism, smuggling, piracy, and money laundering.