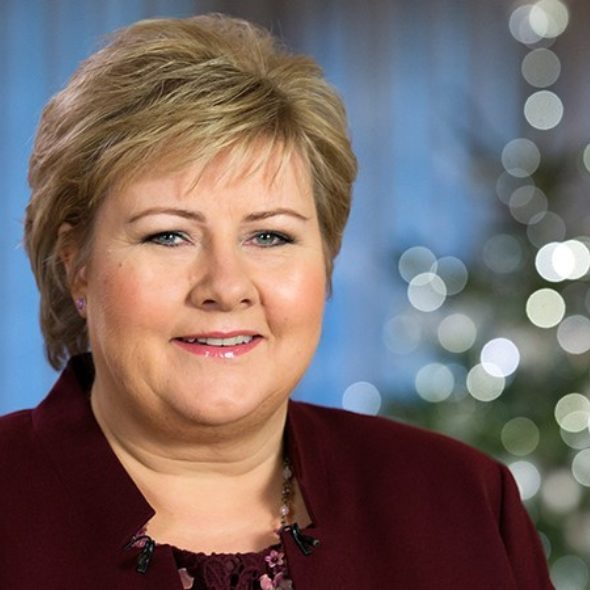 Erna Solberg has been Prime Minister of Norway since 2013 and leader of the Conservative Party since 2004. She was born in Bergen in 1961 and has a degree in sociology, political science, statistics and economy from the University of Bergen. She entered Norwegian politics in 1979 as a Deputy Member of Bergen City Council; in 1989, Solberg was elected to the Storting (Parliament), and has held her seat since then. Between 1994 and 1998, Solberg served as the Leader of the national Conservative Women’s Association.

The Norwegian Conservative Party advocates economic liberalism, the reduction of taxes, respect for individual rights, and defines itself as a “conservative party of progress”. It is the most outspokenly pro-European Union party in Norway, having supported the country’s EU membership during both referendums. Solberg views the EEA agreement as EU membership without the international influence, and argues that a new referendum on Norwegian EU membership should be held.

Solberg wants to strengthen the WTO as a negotiating forum and to include more countries in the global economy and economic growth. At the same time she wishes to establish more regional trade agreements, since Norway is a small country that is very dependent on such agreements.

Norway is highly committed to international development and Solberg wants to give Norway an even clearer role in the international community by giving more aid, arguing that this will help combat poverty and help nations and their citizens to help themselves.

In 2003, Solberg proposed the introduction of an Islamic Sharia Council in Norway, and expressed a wish to increase immigration to Norway in 2004. However, her current government, in coalition with the Progressive Party, has received criticism for its stance on immigration: in an interview with CNN, Solberg said, “There are a lot of other people coming into Europe now who are not directly from a war zone ... [and] we are saying that we have to return them. Norway has tried to have a very strong return policy for a long time because it’s important to send a signal back to countries [like] Bangladesh -- or if it’s Pakistan or if it’s Afghanistan ... that there is no free entry to our countries.” She also said: "Afghanistan has safe zones ... so it’s possible to send adults back to that country. We can’t empty Afghanistan."

On the topic of expanding Norway's oil production, Solberg advocates for conducting impact assessments for the Lofoten, Vesterålen and Senja fields. She wants to continue the increase in Norwegian salmon exports, but with an emphasis on environmentally friendly production.

On the question of NATO contributions, Solberg has echoed the German chancellor in saying that Norway cannot take the support of others for granted, but the alliance is still viable. On the issue of Brexit, she has commented that ‘the Brits will hate it if they end up with a Norwegian model’: as a small country with close ties to Sweden and Germany, as well as to Britain and the USA, Solberg is fearful of the consequences of a fractured EU. She argues that Norway’s trading relationships with Germany and the European Union are critical, and as a small country it can easily become the loser as powerful forces try to disrupt international systems of cooperation. On the question of trade with China, she argues that it is important first to be in the same room, then to focus on trade, human rights, and other topics.

ES: “Norway will be a driving force in achieving the UN’s Sustainable Development Goals, both at home and abroad. I am especially concerned with bringing education to all girls. In countries where a lot of families are poor or in suffer of war-damages and illness boys have always been in the priority. Norway supports a lot of programs for development, but I think one of the most important are bringing up the girls away from discrimination, and give both genders education which is essential to get a job and a good life.

I will point out these goals from our platform:

· Work for an effective UN in which human rights are given priority across the organization and receive a larger share of the overall resources.

· Work to ensure that Norway takes a leading international role in the fight for women’s rights and gender equality.

· Establish clear requirements for recipients of Norwegian development assistance regarding their willingness to promote human rights, democracy and development of the rule of law.

· Be a driving force internationally in the fight against child marriage, offer assistance with developing legal protections against forced marriage and conduct information.”

Foreign policy no longer entails only what takes place outside of Norway, but affects our daily lives. Norwegian foreign policy must safeguard Norwegian interests and values. As a small country with an open economy, we benefit from close international cooperation, a system of international law and an effective framework for international trade.

Environmental challenges, war, refugees, poverty and insufficient development are problems that ultimately cannot be solved by the individual nation-state alone. Norway must be a driving force for international agreements that establish freer trade and include more countries in the global economy and economic growth. The efforts to strengthen the WTO as a negotiation forum are critical in this context, and new regional trade agreements are being developed as well. It is also important that Norway is not excluded when new regional trade agreements are negotiated and enter into force.

Extensive participation in development efforts gives Norway a clear role and voice in the international community. The goal of Norwegian development assistance is to fight poverty and help countries and their citizens to be self-sufficient. Our aim is to further develop a modern national defence force with adequate capacity to maintain security in Norway and assist in allied operations. A globalized world increases our mutual dependence. In an increasing number of areas, our domestic policy is affected by changes outside of our national borders.”