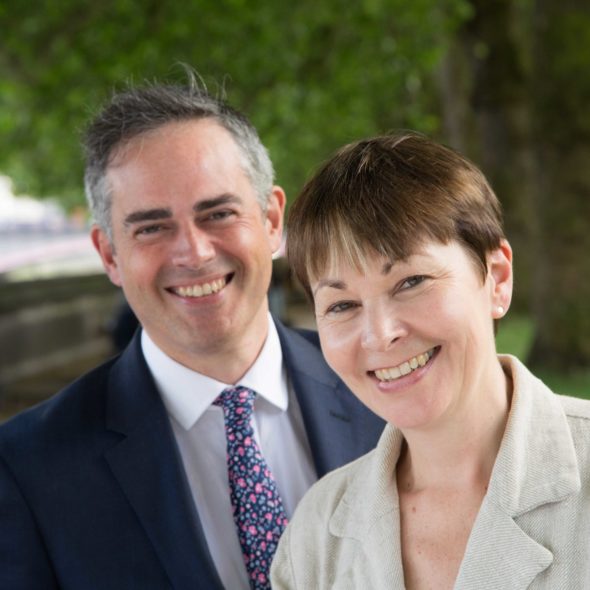 Caroline Lucas and Jonathan Bartley lead the Green Party in England and Wales as a job share. Lucas is the Party’s sole MP in Parliament and represents the Brighton Pavilion constituency in the south of the UK. Bartley has stood as a parliamentary Green Party candidate, and in addition to being the Party’s co-leader he is also its Work and Pensions spokesperson.

Bartley is a Christian and plays the drums in a blues band. Lucas enjoys vegetarian cuisine.

The Party sits with other green parties in the European Parliament’s ‘European Free Alliance’ group.

The Party campaigned to remain in the Brexit referendum.

The Green Party accepts the result of the Brexit referendum but has set out three priorities for Brexit: protection of the climate and environment; preventing the UK becoming a tax haven; and preserving freedom of movement.

Caroline Lucas voted against the triggering of Article 50 in Parliament.

Lucas has said: “We’re calling on the British government to give Parliament proper oversight of any new deals – whether that’s the touted deal with Trump or any new deal with Europe. At present deals are snuck through without a proper debate or yes/no vote – it’s time for an urgent democratic upgrade.”

While Bartley has added: I don’t believe they [the British public] voted to turn away from European values, from democracy or the rule of law. Or to cosy up instead to dictators and one-party states in return for dodgy trade deals.”

The Green Party is pro-immigration, both from the EU and beyond. Lucas has voted against stronger enforcement of immigration rules in the UK Parliament, as well as against a tougher asylum system.

The Party believes that mass migration is largely the fallout of historic colonialisation, modern violence, climate change, and unfair global economics. They say: “The Green Party recognises the contributions made by many migrants to their recipient area or community. We value the cultural diversity and intercultural awareness resulting from both temporary residence and migration.”

Bartley has stated: “We must stop looking at our neighbours in anger and place the blame where it truly lies – with the government, and those who collude in its narrative of shame. We must recognise how much richer our lives and our country are when shared. If we do not we will find ourselves poorer in every sense.”

Lucas has argued against nuclear weapons, arguing that conventional forces are better placed to fight current threats to the UK such as terrorism. She has also voted against military action overseas, including against Daesh/ISIS.

The Green Party believes “the nature of conflict in the twenty-first century is highly complex, involving state and non-state participants at every level. Much international conflict today arises directly or indirectly from the abuse of power by rich Northern nations.”

On NATO the Party says: “the North Atlantic Treaty Organisation (NATO) is a military-oriented body, which imposes conflict cessation rather than encouraging peace building. As such, it is not a sustainable mechanism for maintaining peace in the world. In the long term, we would take the UK out of NATO. We would also end the so-called "special relationship" between the UK and the US.”

Lucas has voted for measures to reduce climate change, against lower taxes on motor vehicle fuel, against culling badgers (which are believed to contribute to the spread of bovine tuberculosis), and is an opponent of fracking.

On aid Bartley has said: “cutting the aid budget will cost lives. Any moves … to roll back our commitment to international development would be a dereliction of this country’s duty to the rest of the world. We know that aid alone isn’t enough, and that it must come alongside fairer trading rules, but it is the bedrock of a credible foreign policy where Britain can play a positive role in world affairs.”