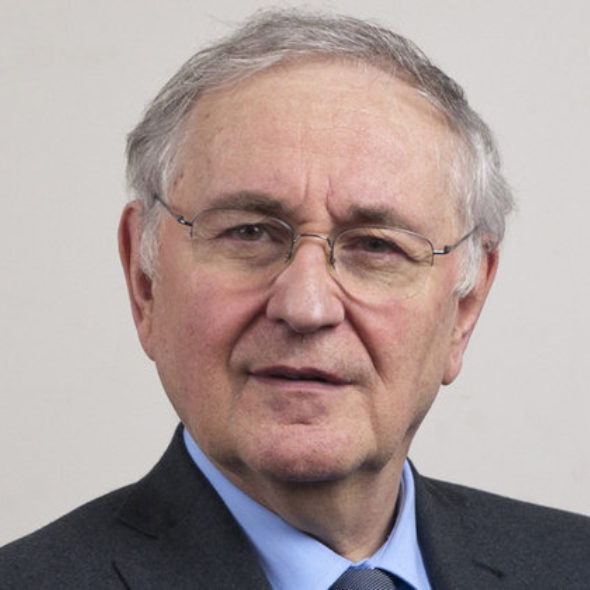 Jacques Cheminade is a politician who describes himself as “anti-élite”, having had close experience of the élite as a student of the HEC business school, the Ecole Nationale d’Administration and as a former diplomat and senior civil servant. Affiliated with Lyndon LaRouche’s movement, he has founded a political party called “Solidarité et progrès” or “Solidarity and Progress”.

He calls himself a “left-wing Gaullist” and as “the champion of labour against financial globalization.”

“To recover its purpose, [France] must, first and foremost, face up to the real threat: financial globalization. … The European Union is not only unable to protect us from this threat, it has become, in fact, its accomplice, thanks to its rogue currency. The poverty, unemployment and despair endured by the French are the consequences of financial austerity forced on them by this Empire of money.”

Jacques Cheminade: By freeing France from financial occupation: that is to say, by giving it back its monetary, economic, military and diplomatic sovereignty, France will be able to work for peace and for mutual development to the benefit of all the people on the European continent and beyond.

JC: France is a great nation only when it champions the cause of Humanity. It means that, today, France must be the catalyst of the new paradigm the BRICS are trying to put on the global agenda: a paradigm based on a new world order founded on mutual cooperation for economic, scientific and social progress and for the respect of each country’s national sovereignty. This is the same philosophy which is inherent in the Chinese “New Silk Road” project.

Jacques Cheminade declares that he is fighting against the “financial occupation of France.” This is the keystone of his domestic and foreign political platforms. He wants to organise an international conference on debt and on the international monetary system, during which, amongst other topics, his “new Bretton Woods” plan would be debated. His aim is to elevate this topic to the international level by raising it at the United Nations General Assembly, and pushing for the adoption of “a new Glass-Steagall [Act], both global and national” which would separate investment and commercial banking activities. “This is the weapon that will prevent the world of money from causing further harm.”

The European Union’s “democratic deficit” is one of his main arguments for a Frexit. “The European Union, as an anti-democratic and bureaucratic construction, has turned against its people and its member states; so we need to leave it in order to rebuild a progressive Europe of homelands and sovereign peoples.”

“[France must] get out of NATO, out of the Euro, out of the European Union, because these institutions, in the sacred name of money, prevent any change in the system. We would not leave in order to become isolated, but to build a new world: together with the European countries whose people are waiting for this change, with the BRICS nations of Brazil, Russia, India, China and South Africa, and all those who are willing to build a new international order, a win-win deal to break the stranglehold of the global financial system. The Europe of today has turned against itself; it needs to be rebuilt by rejecting the world of money, by giving it back a founding purpose. France and Europe will recover their purpose by taking part in the great projects that shape the common interest of humanity : in major infrastructure, in space, in the management of water and climate.”

Cheminade is a long-term opponent of NATO and wants France to leave NATO’s integrated command structure. He believes that NATO “has no other purpose than imposing a military and financial world order to displace the UN.”

His defence policies would be created within the framework of an “agreement, based on strong mutual understanding, détente and cooperation with the BRICS countries and all those involved in the New Silk Road project.”

He also proposes enhancing France’s military reserve force and allocating “more than 2% of GDP” to defence.

In order to tackle the issue of terrorism on French soil, Cheminade proposes the creation of a “community intelligence service” and an “Office of General Territorial Intelligence” in order to increase the number of undercover operations without “being drowned in Big Data.”

Cheminade believes that terrorism can be eradicated by “resolving the Middle East problem.” In order to do this, he would “organise a summit in Paris with all the countries involved, from the Maghreb, from the Gulf, from Africa and the whole world, to put an end to this destructive geopolitical conflict which holds French Muslims and indeed all of us hostage; to put an end to this threat by fighting it together and by creating a new order of shared development that will erase the root causes of the problem.”

“The current system is a ‘No Future’ system and this is the real reason for the insecurity and terrorism.”

Cheminade would like to put a ‘new Marshall Plan’ in place for the Southern Mediterranean. “Until Syria, Libya and the countries in this area are stabilised and rebuilt, Jihadist terrorism cannot be eradicated.”

“We must change our politics, and return to the Gaullist principle of recognising a people’s right to self-determination, of recognising existing states instead of attempting regime change based on self-interest.”