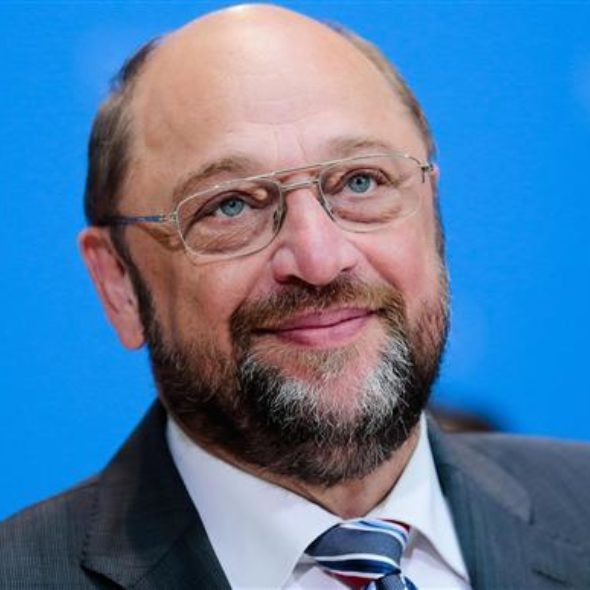 Martin Schulz sat in the European Parliament for 23 years and from 2012 to 2017 was the President of the European Parliament. He originally trained as a bookseller and was the Mayor of a small town called Wuerselen in Germany’s North-West. On 19th March 2017, he was elected as the leader of the Social Democrats and as their candidate for Chancellor.

Mr Schulz is an ardent pro-European who regards the European Union as the most potent force to ward off the “demons of the 20th century”, which he defines as racism, xenophobia and antisemitism.

More than that, Schulz has made European reform the defining idea of his campaign, pledging “to found Europe anew”, based on principles of solidarity (economic solidarity but also solidarity in the refugee crisis) and peace.

In its “Zukunftsplan” (“Strategy for the Future”), the SPD has promised a foreign policy in the tradition of Willy Brandt, Germany’s chancellor from 1969 to 1974, focusing on peace and détente and rejecting what he calls an arms spiral of Donald Trump’s making.

The common theme linking Martin Schulz’s domestic policies is social justice. In the international context, Schulz defines this as greater solidarity while also pointing to the need for environmental justice and fairer trade practices.

Strengthening European institutions has long been a central pillar of Mr Schulz’s agenda. In a spirit of greater solidarity during the European debt crisis, Mr Schulz has advocated for Eurobonds, debt relief and moving towards a banking union. After Brexit, he published a ten-point plan for reforming the EU. He called on the European Commission to focus on areas where it could genuinely add value and proposed a “growth union”, a European Union with a singular focus on promoting economic growth, hand in hand with social justice.

Referring to the European project as one of recent history’s greatest achievements. Schulz has emphasized that the EU is currently the best way to fight the "demons of the twentieth century", such as racism and xenophobia. Schulz has also argued that Europe would need a headquarters for civil and military missions in Brussels and deployable troops if it wishes to maintain the security of its citizens.

More recently, Mr Schulz has endorsed the reform plans of France’s President Emmanuel Macron, joining Macron in advocating for a Eurozone finance minister in charge of a budget for investments. Mr Schulz has criticised Chancellor Angela Merkel for wanting to address these proposals after the German election.

Mr Schulz has been a strong supporter of free trade. As President of the European Parliament, he usually refrained from voting, but he made an exception for the transatlantic free trade agreement TTIP.

He sees the CETA free trade agreement between Canada and the EU as an international model for future treaties that guarantees important social and environmental protections.

Following pressure from US President Donald Trump on European NATO members, Mr Schulz came out in opposition to the NATO goal of spending at least 2 per cent of GDP on defence. Schulz has warned that this would result in a “Germany that is armed to the teeth” and rejected the target because of the “enormous financial burden” it would impose.

In June 2016, he went further and pledged to take back Germany’s commitment to meet the 2% target, and to resist attempts to link economic growth with defence spending.

During the G20 in Hamburg, Mr Schulz proposed that defence spending should be matched, in a 1:1.5 ratio, by investing in crisis prevention and development cooperation. Instead of linking defence spending to economic growth, he has committed to the target of spending 0.7 % of Germany’s GDP on international development.

Schulz also argues for channelling some of the financial dividends of free trade agreements into humanitarian and development initiatives such as the World Food Programme.

To address the refugee crisis, Mr Schulz has called for greater solidarity in the European Union. He has argued that the next EU budget should become a “solidarity pact”, creating concrete financial incentives for member states that take in refugees, while cutting subsidies for members that resist the distribution of asylum-seekers.

He has categorically rejected an upper limit for the number of asylum-selectors that Germany accepts and has argued for allowing more Syrian refugees to bring their families to Germany.

Responding to the US bombing of a Syrian military base in April 2017, Mr Schulz called for a diplomatic solution to the conflict and made the case for greater involvement from the European Union in negotiations. He has opposed a further military escalation in Syria.

Previously a supporter of Turkey’s accession to the European Union, Mr Schulz has revised his position since the Turkish government’s crackdown after an attempted putsch in July 2016. He has rejected the possibility of letting Turkish citizens in Germany vote in a referendum to reintroduce the death penalty in Turkey.