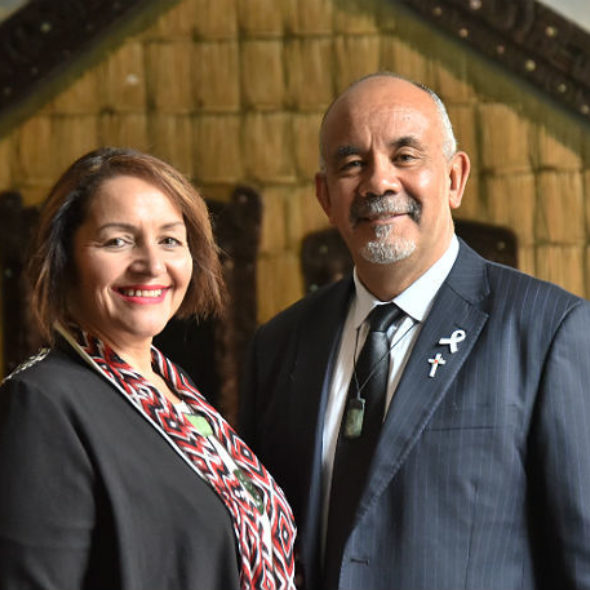 Marama Fox is an experienced educational leader; during her 26 years career in education, Fox taught in a number of Māori schools and served as an advisor in the Ministry of Education. During the 2014 election, Fox was elected to the Parliament and was appointed as co-leader of the Māori Party later that year. Currently, Fox also serves as a Member of the Business, Justice, Māori Affairs and Standing Order Committees.

Te Ururoa Flavell Earned a bachelor’s degree in arts from the University of Auckland and a Master’s degree in arts from Waikato University. After graduating, Flavell worked for a radio station, served as a teacher and principal, and as the CEO at a whare wananga (a college specialising in traditional Maori knowledge) and a consultant to a number of government agencies. Flavell became an MP in 2005 and was elected as Māori Party co-leader in 2013. He has represented Māori entrepreneurs on various business delegations to Malaysia, South Korea, Japan and other countries.

Flavell said before leading a business delegation to China that “Maori enterprises want to be serious partners with China and Chinese businesses (…) [we] are heading to China to create and extend our trade relationships.”

When attended the re-opening of a Maori-owned plant in Malaysia, Flavell said “we have strong ties with Malaysia in trade (…) the Maori economy is open for business and a good provider of the high value products that Malaysians seek.” In a speech in Seoul, he said that “we regard cultural connections as key to unlocking the economy and export opportunities now made more possible by the free trade agreement between our countries.”

On the question of climate change Flavell commented that the “Maori Party recognizes the urgency in finding ways to work together so that we can all address climate change”, “we have advocated the planting of 100,000 hectares of new forests over the next ten years.” Fox has stated that “[it is important] to work together to find sustainable solutions for everyone.”