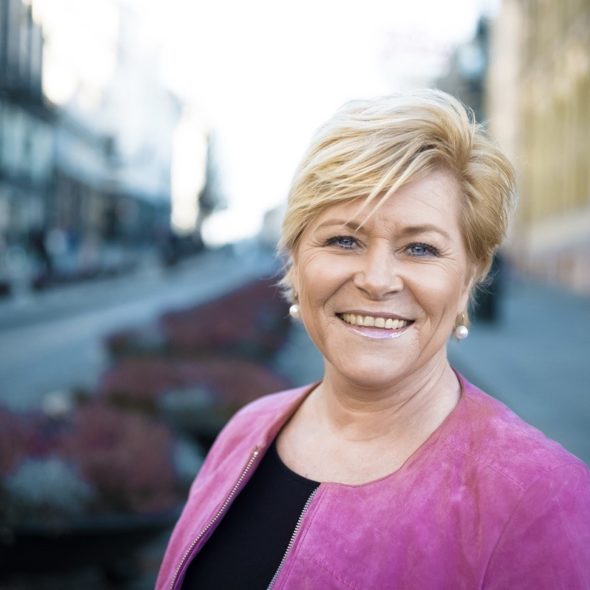 Siv Jensen was born in Oslo in 1969; she received a degree in business studies from the Norwegian School of Economics. After graduating, Jensen worked as a sales consultant for Norway's Radio 1 until 1994, when she became a full-time politician. She joined the Progress Party in 1988.

While serving as a Deputy Representative, Jensen was elected as a Member of the Storting (Parliament) for Oslo in 1997. She was appointed First Deputy Chairman of the Progress Party in 1998, and elected as the party’s Parliamentary Leader in 2005. In 2006, Jensen assumed the role of the Leader of the Progress Party; she ran for Prime Minister in 2009 and received a record share of the vote but the centre-right coalition eventually lost out to the centre-left coalition. In 2013, Jensen led the party into a centre-right government coalition with Erna Solberg (Conservative) as Prime Minister.

The Progress Party describes itself as valuing individual freedom and market liberalism, and supports the downsizing of bureaucracy and the public sector. The party seeks a stricter immigration policy and stronger measures on migrant integration and law and order. In foreign policy, the party is strongly Atlanticist and pro-globalisation; it is broadly neutral on the question of Norway’s membership of the European Union.

Jensen espouses a distinctly conservative immigration policy, claiming that the Norwegian welfare society is entirely dependent on a strict approach to immigration. She has suggested moving asylum centres from Norway to Africa and Asia, so that refugees can seek asylum at home while under protection. She has also advocated sending back refugees rescued in the Mediterranean to the countries they have travelled from, believing that this will act as a deterrent and prevent more refugees from embarking on dangerous voyages. Jensen has argued for the introduction of language and citizenship tests that adult family immigrants must pass in their home country before they can obtain a residence permit in Norway. This, together with a scheme restricting family reunification, is perhaps one of her most controversial policies. In an interview with Aftenposten, Solberg stated “We believe it is now time to demand that after five years’ stay in Norway, [immigrants] must have learned Norwegian in order to receive welfare benefits”. Solberg argues for terminating the 2015 proposal for Norway to take in 10,000 Syrian immigrants, and has talked about a “sneaking Islamisation” (snikislamisering) of Norway.

Although Jensen voted for Norway to join the European Union in the 1994 referendum, she says that she would have voted against it today, and that Norwegian law should only be made and enforced in Norway. She argues that as the EU has evolved in a supranational direction (as exemplified by the Lisbon Treaty), the Brussels bureaucracy has moved in the same direction, and that this makes life harder for ordinary EU citizens. She believes that the EEA needs to be renegotiated in order to better safeguard the sovereignty and national interests of Norway.

Jensen is regarded as a climate change doubter. She argues for shifting policies away from penalties and regulation of vehicles and emissions, towards incentive based structures. She is in favour of opening and exploiting the proposed new oilfields near Lofoten, Vesterålen and Senja.

She is in favour of Norway being fully committed to and active within NATO, commenting that ‘others shall not defend Europe and Norway while we sit and watch. We have to strengthen our own capacity and work closely with NATO.’

SJ: “My ideological basis is liberalism. I believe that every human being is unique and must be showed respect and dignity. To treat people differently based on gender, religion or ethnic origin is wrong. Likewise is it wrong to subject people to uniform political and religious systems that suppress their personal freedom and personal choice. I am working for more individual freedom and more responsibility for each individual in Norway. I also think it is important to promote these values globally. Therefore I am a strong proponent of working to promote and strengthen human rights: Freedom of the individual, gender equality, freedom of speech, freedom of religion and the right to own property. Unfortunately too many people in the world are denied this. It is important that Norway is speaking up for them. The free market and free trade between countries is a key part of what I believe in. This is the most important tool we have to get economic growth and fight poverty. This is promoting peace in practice: people who trade with each other don’t fight. A free economy is also the spine of a liberal democracy.”

SJ: “I think that Norway is a very good example of what one can accomplish when you value individual freedom, human rights, democracy and a market economy. Norway used to be a poor country just a century ago, but now we are incredibly rich. I hope that this can be an inspiration for other countries and people, striving to work their way out of poverty. I think that Norway has high competency in specific fields that could be useful to other countries, for instance how we manage our petroleum resources and fisheries. We already have programs where developing countries can learn from our experience, called Oil for Development and Fish for Development. We also recently started a program on gender equality.

I would also want to see Norway as a trading partner for the developing countries in the world. I have far more faith in trade and investment as tools to fight poverty than I have in development aid. We have far too many examples of aid contributing to a culture of corruption and dependency, whereas trade has lifted millions of people out of poverty.

I also think that Norway faces challenges that we cannot deal with on our own. Whether it is extremism and terrorism, plastic in the oceans, pollution, or uncontrolled migration, we need to work with other likeminded countries.”