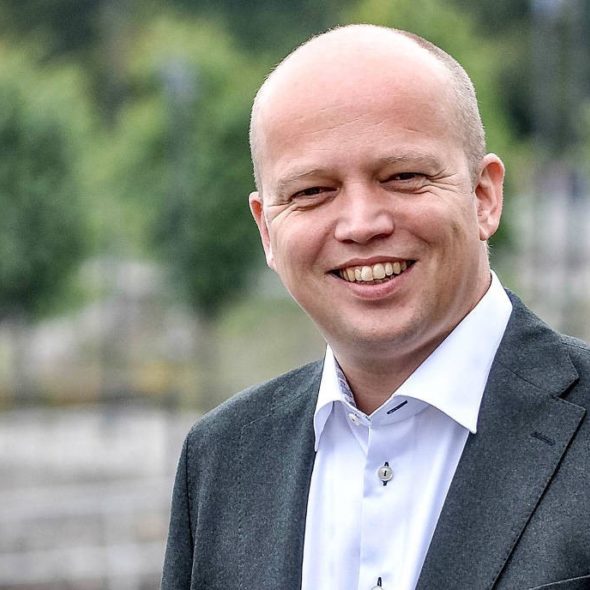 Trygve Slagsvold Vedum, born in 1978 in Hamar, has been the leader of Norway’s Centre Party since 2014. He has also worked as a farmer and has an education in agronomy, sociology and political science. Vedum was elected as a Member of Parliament in 2005 and re-elected in 2009 and 2013. He served in the Standing Committee on Local Government and Public Administration and moved to the Standing Committee on Health and Care Services in 2008. Vedum became second Deputy Leader of the party in 2009 and Party Leader in 2014. He served under Prime Minister Stoltenberg as Minister of Agriculture and Food between 2012 and 2013.

The Centre Party is in favour of maintaining decentralized economic development and political decision-making. The party maintains a hard-line stance against Norway’s membership of the European Union; it successfully campaigned for a ‘no’ vote during both referendums on Norway’s membership. The Centre Party has recently declared Norwegian nationalism to be a “positive force.”

The Party argues for replacing the EEA agreement with trade and cooperation agreements with the EU, and Vedum intends to call a referendum on Norway’s EEA membership. He has also promised to reject regulations that are not EEA-relevant and to work for closer cooperation with the UK in EU and EEA issues. In an interview with Aftenposten Vedum commented: “After Brexit, there were changes in our relationship with the EU. Our main objective is to ensure both Norwegian trade and the principle of public policy. Norwegian elected representatives must be held responsible for the decisions taken for our country. What we have seen with the EEA agreement is that power has moved away from the people”.

Vedum believes that NATO has operated too much outside its own territory and wants to redevelop NATO cooperation under the principle that defence of the national territories of the Member States is the main purpose of the Alliance. All international operations involving Norway must be thoroughly evaluated. He would like to strengthen the National Guard and focus on national defence.

The Centre Party’s position on international trade is considered somewhat controversial. As a party representing many farmers and agronomists, they do not consider free trade as a realistic option, and argue for exploiting all the leeway within the current WTO agreement for applying the highest protective tariffs, percentages or units of customs, that can be used at any given time.

Consideration for the farming lobby also impacts the Centre Party’s sustainability agenda, which claims to seek a balance between environmental policies that demonstrably benefit the environment, whilst protecting the interests of farmers and agrarians. The party is opposed to expanding Norway’s oil production.

Vedum has argued for a stronger UN with increased legitimacy, and believes that Norway is not served well by new groupings such as the G20, or coalitions of volunteers, that increasingly set the context for international politics. The UN’s focus on rights, he claims, is an important counterweight to the economic focus of other organizations: the UN should be strengthened as a peacekeeper and political advisory body that can be at the centre of efforts to establish functioning states based on openness, accountability, democracy, human rights and law.